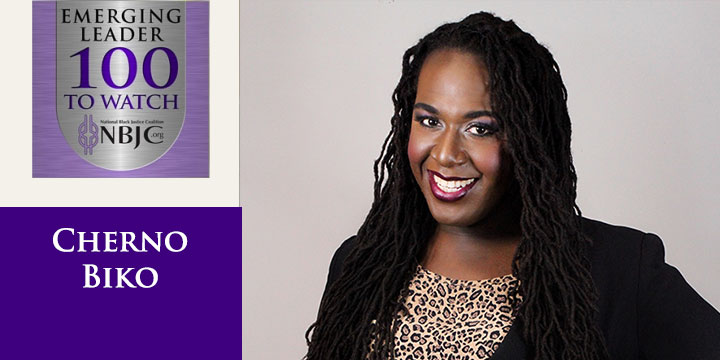 My name is Cherno Biko and I am a human rights advocate. Earlier this year, when I was appointed to serve as the co-chair of the New York City Council Young Women’s Advisory Council, we launched a campaign titled “She Will Be ______”. All I had to do was fill in the blank and the only thing I felt justified in wishing for was to simply be ALIVE. I have been commissioned to write a letter of hope for future generations in honor of the Trans Day of Remembrance. By now I’m sure you’ll have studied our sacred text Redefining Realness by Janet Mock and you’ll undoubtedly hear of the legendary tale of Laverne Cox and her rise to superstardom. However, the reality for many of us is much more nuanced and complex than the glossy images of us on red carpets and on the covers of magazines. Tragically, this is being called the deadliest year on record for folks like us with the total number of murder victims ranging from 21-25. The violence against black trans women is occurring at a rate that remains alarmingly high, and contributes to our shortened life expectancy. This unfortunate reality prompted me to join the larger #BlackLivesMatter movement, because we must declare that all black lives matter, including black trans folks.

Many of the causes of death have yet to be released, but from what is known, a majority of the black trans women lynched this year were either shot, burned, or stabbed to death. As I bear witness to these stories, I’ve begun contextualizing the violence against folks like us through the lens of Ida B. Wells’ A Red Record, a work of investigative journalism that tracked lynchings in the 19th and 20th century. Her legacy empowered me to utilize communication technologies like social media to lift up our stories. Unfortunately for black trans women especially, there is no shortage of death. Our average life expectancy is a paltry 35 years, less than half that of the average cisgender woman.

But the war on black trans women—doesn’t begin and end with these murders. With the stigmatization and criminalization of trans people persisting in law enforcement, it furthers the oppression faced by folks like us. We must continue elevating the conversation around the social and institutional violence and, in doing so, include the ways black trans people are disproportionately and uniquely impacted. Also, the media often enables the stigma and discrimination already endured by trans people, by portraying us as less than human. Instead of being honorably covered when targeted by hate or malice, many outlets misgender and slander trans women of color in death, using mug shots, birth names and/or incorrect pronouns. Even worse, they speculate on so-called justifications for their murders—such as sex work, homelessness, and drug use, which remove the accountability from where it belongs: on anti-trans violence and oppression.

In fact, I’m less interested in dismantling these systems of white supremacy, cis/hetero patriarchy and capitalism and more invested in imagining the type of world we’d like to live in. It’s my hope that in the future black trans folks will be loved, respected, included, paid, healthy and free. Simply, it’s my hope that #BlackTransLivesMatter too.